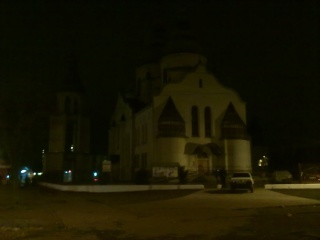 I was walking home tonight after being at the Pratt’s house this evening, and I saw something that struck me with a spiritual picture.  It was a local church with a big fence around it.  There was a guy knocking at the door and nobody was letting him in.  It’s the perfect picture of what happens to people when they loose sight of a relationship with God and replace it with empty religion.

Jesus was the everyman’s man.  He wasn’t a high-and-mighty clergyman that spoke in lofty tones.  He was a carpenter from Nazareth that hadn’t gone to any seminary, hanging out with twelve other guys from various parts of Judea and Galilee of similar blue-collar backgrounds, simply speaking the truth and loving people.  He let children come to Him, he let prostitutes come repenting, he ate with tax collectors to reach out to them

Look at the fence.  Look at how high the cross is.  It’s almost like it’s unreachable – an unattainable holiness that is exhibited by spiritually high walls.  No!  Jesus Christ’s cross is a symbol of how He already came down to us, not how we are to climb just high enough to get to Him!

…but they don’t see that, and that’s why we’re here.  We are here to get the word to the everyman – that the Everyman came down to give salvation every man… every man that will come to Him.