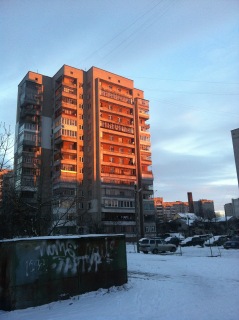 You know, sometimes even things that are somewhat ugly in some ways can be quite beautiful.  This is a picture of my apartment building from behind.  I was walking up the other day to it at sunset, and I was really blessed by the visage of the sunlight streaming in those orange and yellow tones.

Now, I like my building, but others would say, “That’s just an old, 80’s, soviet-style, blocky apartment building.  There’s nothing of beauty to appreciate!”  For me, that’s home.  I have the coolest neighbors, a great landlord, an apartment that’s just big enough but not too big for a guy like me, and I get to watch the sunrise AND the sunset from my windows on opposing sides of the building (if I’m home for them).

From the graffiti on the bottom left, you can see that I don’t live in the best neighborhood.  I live in an area known as Levandivka (“Lev-an-DEEV-ka”), and these guys called hopnyks (“hope-nicks”) are famous for living here.  That’s kind of like our English word for “thug”, but, in my opinion, a little less violent.  All that to say, though – they’re not “the best of company”.  Y’all can pray for me for that.  A lot of my friends in my neighborhood could be considered hopnyks.  I really want to reach out to those guys.  It’s funny…  I have an open door with them, but I didn’t really seem to be able to reach out to guys like that in America.

Anyways… just because someone else says you’re ugly, your life is ugly, or what you do isn’t good enough or has no purpose, doesn’t mean that when God looks at you He frowns.  Others may frown at the picture of my neighborhood and my building, but I look at it and smile.  I say, “That’s home!  I love my home!”  He looks at you and says, “That’s my child!  I love my child!”

Thanks, God, for looking at me and smiling!