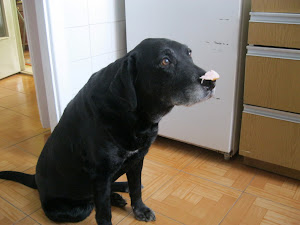 This is Vesta, Katya’s labrador, in the middle of performing a trick for us. She can also count to three, respond to questions, and knows the capitol of Ethiopia (Addis Ababa, for those of you that don’t know… that’s “Bark, Bark!” in dog language). She primarily speaks Ukrainian, but I’m hoping to get her to understand some more English soon.

When she does the trick that’s in the picture, Katya places a treat on her nose and tells her “Ne mozhna,” or “No, you can’t,” and waits. You should see it – this dog is the perfect picture of ultimate concentration; she stays completely still. A few seconds later, Katya says, “Mozhna!” and the dog flips the treat up in the air and catches it faster than you can say “hot dog!”

Do you ever feel like this dog? Are you waiting for something? Are you expecting something from God, but He hasn’t given it to you yet?

I’ve been doing my normal read-through-the-Bible-in-about-a-year-or-so devotional plan, like I usually do every year (last time it took me two years to get through the Bible, though… haha…), and I just started 1 Samuel. The book opens with the story of Hannah, a woman in a pretty sad situation. You see, for some reason, her husband, Elkanah, wasn’t satisfied with having just one wife. The Bible doesn’t tell us which of his wives was his first one… It does say, though, that Penninah was the one that had kids and that Hannah was the one that he loved (in other words… if he married Penninah first, he probably married Hannah ’cause he wanted a prettier wife. If he married Hannah first, he probably married Penninah because he wanted to have kids… either way, he was dissatisfied with what God had given him and decided to sin instead of trusting Him to take care of his needs…).

I feel really bad for Hannah at this point in the story. She probably felt like less than half of a woman. In those days, it was expected that a woman should bear children… It wasn’t just her logical progression in life – it was part of her occupation. It was also very disgraceful for a woman to be barran. Hannah couldn’t do what she felt like she needed to, and here’s why:

God was the one keeping her from having kids! She may have even felt like it was God’s will for her to have children (and it obviously was, as we see later in the chapter), but God was keeping her from that opportunity. He was closing the door to give greater joy, greater glory, and a greater calling.

If God hadn’t have done this, I don’t believe that Samuel would’ve been the man of God that he needed to be to save Israel. You guessed it, Samuel was the son that God miraculously allowed her to have after she prayed and asked Him for a child.

Do you know what she did now that she finally had a child, now that she finally had what she wanted from the Lord? Did she hold onto him tightly and never let him out of her sight? Did she raise him up to be a brave and strong young man, cherishing the ability to watch him grow up? No. She dedicated him to the LORD. God gave her a son, and she gave him right back to God.

Then they arose early in the morning and worshiped before the LORD, and returned again to their house in Ramah. And Elkanah had relations with Hannah his wife, and the LORD remembered her. It came about in due time, after Hannah had conceived, that she gave birth to a son; and she named him Samuel, saying, “Because I have asked him of the LORD.” Then the man Elkanah went up with all his household to offer to the LORD the yearly sacrifice and pay his vow. But Hannah did not go up, for she said to her husband, ” I will not go up until the child is weaned; then I will bring him, that he may appear before the LORD and stay there forever.”
(1 Samuel 1:19-22 NASB)

Now, through the suffering that she had experienced, she was ready to give him up for the calling that God had on his life. I’m sure that was a very hard thing to do, but look at the fruit of it! Samuel became one of the mightiest men of God that have walked this earth! God was able to speak directly to him and he would obey, and he was given the opportunity to annoint David, the forerunner and ancestor of the Messiah, to be king of Israel!

I love another principle that I see in these verses. You can always trust God, and you cannot outgive Him.

The LORD visited Hannah; and she conceived and gave birth to three sons and two daughters. And the boy Samuel grew before the LORD.
(1 Samuel 2:21 NASB)

In other words – God gave Hannah a son, she gave him right back to God, and God gave her even more children. You can trust God with your “investment.” If He wants you to do something, He will take care of you while you do it. She didn’t ask for more children, but He gave them to her anyway.

So, if you’re in a situation with troubles and doors closing around you, expect that God is doing something! Ask Him what He wants you to do so that you can be a part of it! God doesn’t want to leave you behind in His plan for your life. Trust Him with the hard things, and trust Him to have His own timing with things!

And we know that God causes all things to work together for good to those who love God, to those who are called according to His purpose. For those whom He foreknew, He also predestined to become conformed to the image of His Son, so that He would be the firstborn among many brethren; and these whom He predestined, He also called; and these whom He called, He also justified; and these whom He justified, He also glorified. What then shall we say to these things? If God is for us, who is against us? He who did not spare His own Son, but delivered Him over for us all, how will He not also with Him freely give us all things? Who will bring a charge against God’s elect? God is the one who justifies; who is the one who condemns? Christ Jesus is He who died, yes, rather who was raised, who is at the right hand of God, who also intercedes for us. Who will separate us from the love of Christ? Will tribulation, or distress, or persecution, or famine, or nakedness, or peril, or sword? Just as it is written, “FOR YOUR SAKE WE ARE BEING PUT TO DEATH ALL DAY LONG; WE WERE CONSIDERED AS SHEEP TO BE SLAUGHTERED.” But in all these things we overwhelmingly conquer through Him who loved us. For I am convinced that neither death, nor life, nor angels, nor principalities, nor things present, nor things to come, nor powers, nor height, nor depth, nor any other created thing, will be able to separate us from the love of God, which is in Christ Jesus our Lord.
(Romans 8:28-39 NASB)