This article may offend some… If it does, please feel free to comment; however, please read the whole thing before answering. Feel free to comment below… Please don’t try to start an argument with me or anyone else on this blog, though. I haven’t blocked anyone yet, and I hope I won’t have to.

I watched what I thought to be one of my favorite movies a few weeks ago. I say “I thought” because there were many things I didn’t realize about this film until this time around – the ideas subtly expressed and implied and the blatant sexual references that were, frankly, way too much for the type of movie that they seemed to be trying to create.

I’m sure most all of you will have seen the film A Walk to Remember with Mandy Moore and Shane West. It’s a tragic love story between a bad-crowd, troublemaking, young man (Landon Carter, played by Shane West) and a saintly preacher’s daughter (Jamie Sullivan, played by Mandy Moore). I’ve read the book and enjoyed it, but, coming to the end, I felt like there was something missing. After watching a piece or two of the movie with the director’s commentary, I know what was missing. Hearing director’s, Mandy’s, and Shane’s perspective on the objectionable parts, my mind was changed on the intent of this film.

The movie is supposed to be a story of redemption for Landon as he changes through his relationship to the preacher’s daughter. The movie can be mistaken as a somewhat Christian film as the soundtrack is taken from bands like Jars of Clay (one of my favorites) and Switchfoot (which also used to be one of my favorites). Songs like “I Dare You To Move” and “Only Yours”, which are two of the greatest of Switchfoot’s offerings, are used in the song. Also the by the redemptive storyline.

Yes, I love Christian music. Yes, the performances are awesome. Yes, the story is very sweet and moving. Yes, I believe that redemption of a lost soul can and should happen!… but! But, but, but! The whole film is without Jesus! The only reference I remember to Jesus in the film is when a friend asked the troubled young man if his preacher’s-daughter-girlfriend was “one of those ‘honk if you love Jesus!’ people.” He responded, “No, she’s not like that.” What? Not that she should be weird about it and one of those emotional, plastic Christians… but shouldn’t she love Jesus? She’s the only person, aside from the pastor, in the whole movie that believes in God.

In fact, by the end of the film, there’s not even any affirmation at all that Landon even believes in God – much less Jesus. Towards the end of the film, in his commentary, the director says that some Christians had given feedback on the movie about this lack of any real conversion. He said that wasn’t the point of the film – that the important thing was that Landon found his own spirituality, not necessarily God, Jesus, or anything like that. (Not his exact words…)

Also, the movie, in a way, makes light of the convictions that many Christians have about physical purity in relationships. Jamie and Landon spend a night together alone in a cemetery, without anything implied, but that’s certainly not how I would want any daughter of mine to behave, or son for that matter! They spend extensive time in compromising situations, usually kissing, etc.

The director, in his commentary, doesn’t really seem to care about that. During a scene where one of the characters is making a very suggestive joke, he, with a laugh, says, “The Christians hate this part!” Mandy Moore replies, “It’s just a joke…” He echoes her sentiments and they move on to the next scene.

Firstly, don’t be deceived… movies, music, and other media that looks like it’s “good Christian material” isn’t necessarily. Folks like those that made this movie know that American Christianity is a large and lucrative market. This movie was made for that. 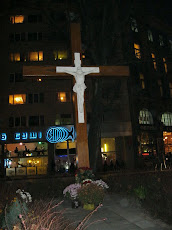 Secondly, Jesus is the only way to true redemption. Yes, if this were a true story, Landon Carter may have had an amazing transformation in his life, gone to medical school, learned compassion, etc., etc… HOWEVER – Jesus tells us in John 14:6 that He is the Way, the Truth, and the Life. Do we believe Him or not? If all Landon found in his life was how to be a “pretty good person” and make a positive difference in his life, that doesn’t change the basic, root problem in his life. His sin is still not taken care of. He is still going to die as a sinner and go to hell. Now, I’m not so concerned about this person in particular, because he’s a fictional character. However, I know that there are billions of people in the world that hold this viewpoint – live a good life, try not to hurt anyone, make a difference, and, on the other side, you’ll be ok.

I’m just saying that there is a lost and dying world out there full of people that think that their “positive energy” or “good karma” is going to save them when they get to the end of their life… That’s not true! If that is true, then Jesus and the whole Bible is a lie. If Jesus is correct, then we need to tell them that they need Him!

I pray that I haven’t offended any of my friends by saying all of this. I just want us to be serious and honest with ourselves about life and about the future of the people around us…

Father, please help me to take seriously the fate of those around me.